How to identify connectors 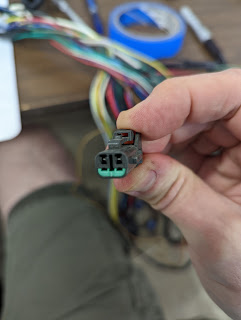 I really should have done a better job of labeling the wiring harness when I was taking it out of the donor. I did label some things, but not nearly enough. And as I am doing the wire diet a couple of years later, I have no bloody idea what some of these things connect to. Here's how I am figuring it out.
First, I choose the next connector I want to work on. I make note of its color, number of terminals, gender, and general configuration. This one is pretty simple, because it only has two pins. 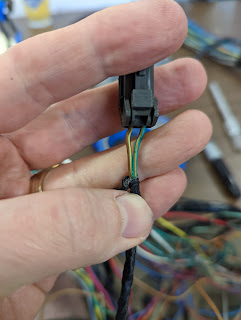 Then I pull back any loom or sheathing near the connector and make note of the colors (main and stripe) on each wire. Bear in mind that these wires spent a decade and a half in the engine bay of a car, so they are definitely dirty, and may also be discolored or faded. More than once, I have gotten the colors wrong, and have had to go back and look again to find the correct color. 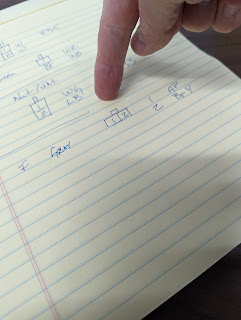 Then I use all of that information to make a little sketch of the connector, and note down its characteristics. There's a pretty well-defined language for this in the documentation.
This is a female connector, so it gets a single border, and the pins are numbered from left to right. Each possible color is given a consistent letter (or two). I have this written down as green with a pink stripe, and brown with a yellow stripe.
It turned out this was incorrect, which caused confusion, but that's what I have noted here. 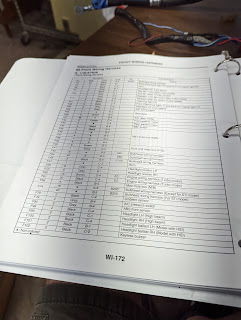 I do know which harness I am working on, so I can take a look at this chart to make some guesses about which connector it might be, and note those down. 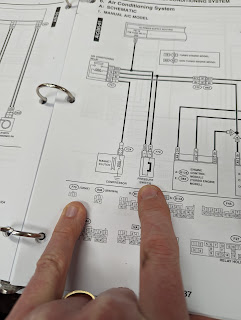 Then I flip through about 150 pages of wiring diagrams, looking for a connector that matches my description. Here, my pinky points to a matching sketch, and my index finger points to more detail on the wiring diagram.
This is the second time through the book, though. I said previously that I got the colors on one of the wires as green and pink (GP) - but I didn't find that, so I looked again and saw that it was in face green and orange (GOr). 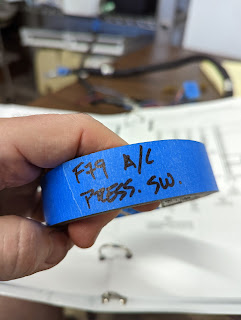 So there we go. It's connector number F79, the connector for the air conditioning pressure switch. I labeled it and moved on to the next connector down the chain.
The kit car won't have A/C, so later on, I will go back and remove these wires from the harness. 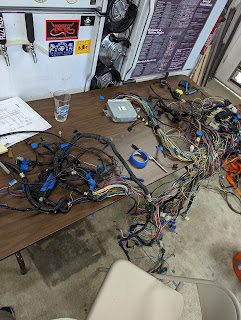 Here's the current status of the harness. The bits on the table to the left of the blue tape roll have been identified and labeled; the stuff on the floor and to the right of the tape still need to be gone through.

Once I have it all labeled, I can continue the diet.

How to Wire Diet 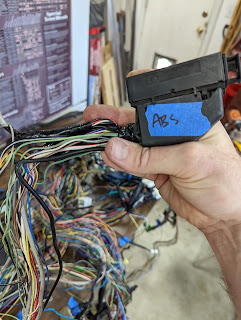 There's a lot of wire in a modern production car. The wire diet is a very useful (but also very time and labor intensive) part of a kit car build. Here's how I am doing mine.

There are a lot of features that were in the donor car that I won't be using in the kit, so I am just tripping wire out that is related to those feature. In this example, anti-lock brakes. Nope, no driver aids in the kit car. This is the connector that plugged into the ABS unit, and I don't wat it flopping around in the kit, so it's time to diet it. 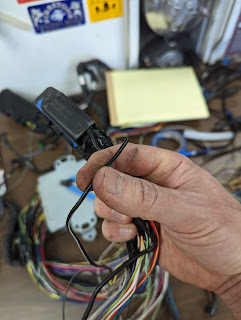 Pick a wire attached to the plug. It doesn't matter too much which one you choose, because they are all coming out eventually. Cut the wire close to the plug. 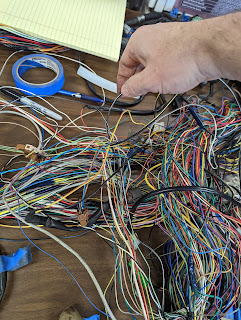 And then chase it back through the rat's nest of wire. The harness went to all corners of the car, so it's possible that a single wire could be fifteen or twenty feet long, piled in with a few hundred others.

Oddly, this reminded me a lot of chasing network cables through a crowded wiring closet. I guess my time in IT has some real-world applications after all.

When you get to the other end of the wire, cut it off there, too. 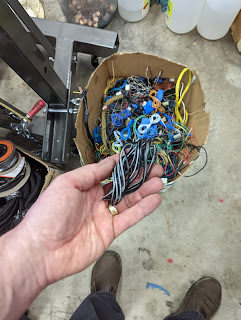 Then, you can bundle it all up and chuck it into the box of wire that you have already pulled out. 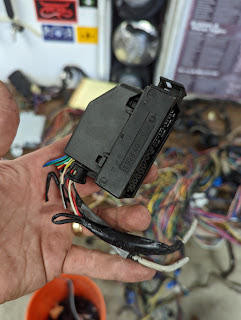 Repeat as necessary, until you've removed every wire from that plug. Chuck the plug into the box as well.

Then identify and diet the next unneeded plug.

You may note a couple of things in the background of this pic - first, my hands are filthy; and second, the orange bucket half-full of trash. Both of these result from having to remove a lot of electric tape and wire loom from the bundled harness. The adhesive on the tape, after years in the donor car, turns to goo that gets all over everything and is challenging to wash off.