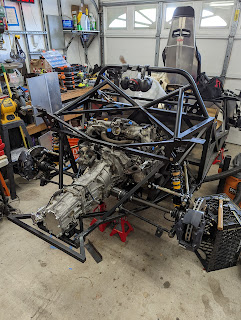 Only one photo in today's update, because everything I worked on was in the rear of the car.

First, I got the axles in, connecting the outputs of the transmission to the rear hubs. Of course, this meant I had to unbolt all the links that connected the knuckle assembly, and just last week I bolted a bunch of heavy stuff to it. I ended up using my engine hoist as a kind of skyhook so I didn't have to wrangle all the weight myself.

As I was putting it all back together, I also assembled and installed the rear coilovers, and went through to install a bunch of spacers on all of the bolts connecting all of the rear suspension members to the rear knuckle and to the frame. And there are kind of a lot of them - each side has two trailing links, three lateral links, and a coilover.

Last but not least, I installed the shock tower brace that ties the rear end of the frame together above the transmission, adding rigidity to the rear portion of the frame.

It feels like good work got done this week. I'm excited to see what happens next.