Back to it, and it feels good. 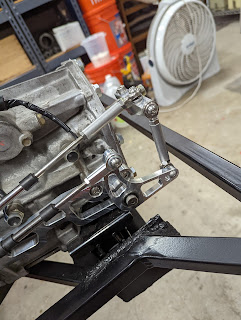 Well, even though I haven't been posting lately, I haven't been completely off the car project. I did do a little bit of recreational research, by going flying with my uncle. This gave me the chance to try out a headset which I may end up using for an in-car intercom. It should give me good hearing protection, allow conversation with the passenger, and also give me audio from my phone for navigation.
But as far as actual work on the car, this weekend I got the shift linkage installed again, and hooked up some push-pull cables to measure for length.
These cables are way longer than I need, because I am using a different shifter than the kit specifies. This should give me better shifting, with a shorter, more direct run.
The cables go up over the engine block, then down through the firewall and into the tunnel, where they will hook up to the shift lever. Once I got them routed, I marked them, removed them from the car, and measured them, and then I submitted an RFQ to have custom cables made. 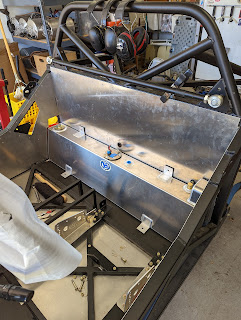 I also reinstalled the upper portion of the rear firewall, and got a few holes set up so that important things can go through it - fuel filler, fuel tank vent, shift cables and electrics. The fuel tank is in and bolted down, too, and I finished bolting down the seat rails and anti-submarine bracket for the driver's seat.
There's also another portion of the firewall which will install forward of the fuel tank, but I'm not quite ready for that - which in turn prevents me from completely nailing down the seat mounting. But I did put the seat in and sit in it for a while today. 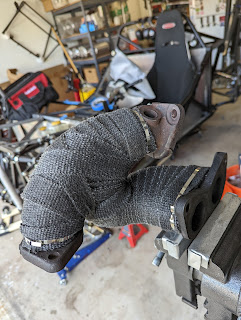 I was going to call it a day there, but the header wrap tape I had ordered showed up, so I wrapped the two pieces of the exhaust that I had not yet wrapped. This is the passenger side header, which I wrapped with 1" wide tape. The other components (driver-side header, crosspipe, and up-pipe) all got 2" tape, but the tight bends and branching pipes on this one made it easier to wrap it with the narrow stuff. 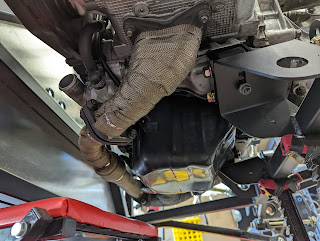 Then I mocked up all the exhaust pieces. Nothing is tight here, just assembled as a mockup. Like most things in this project, it will probable all come off again before it's final. 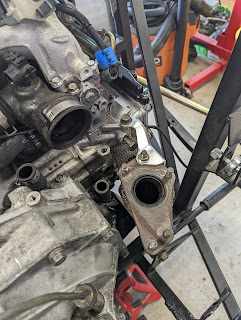