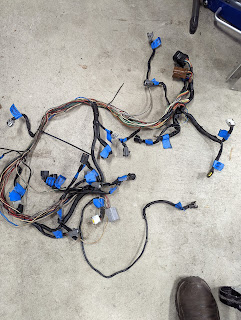 In order to pull wires out of the engine harness, first, I had to strip away most of the unneeded loom and tape. I thought that this was going to be enough, but I actually did end up pulling off a bit more in later steps, as I identified wires and ran them back. 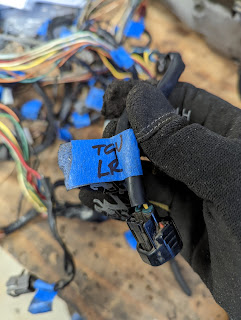 Here's an example of a connector I am removing. This is one of two connectors for the driver's side Tumble Generator Valve (TGV). I'm just not going to run TGVs, and I don't want these just hanging off the harness, so I traced all the conductors through the harness and removed them, end to end. That's four TGV connectors and a few others. 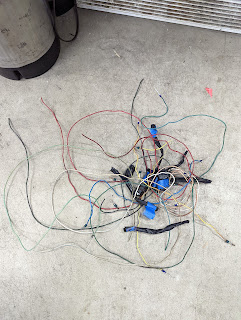 Here's everything I have removed so far. All told, I think I pulled half a dozen connectors and their related wiring out. I also moved one sub-harness from the right side to the left, so I can get it all through one passthrough. 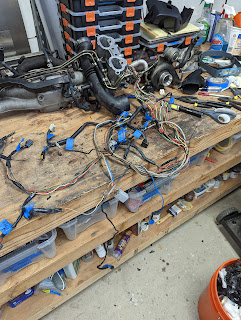 Here's what's left. I think there are still one or two I need to pull out. For example, there's one labeled just "P/S," which I am pretty sure means that I pulled it off the power steering pump. Since I am not running power steering, that's unneeded.

Once I get everything researched and the last extraneous wiring out, I can start relooming it all by plugging it all in and routing it around components and through the wiring channels.