Replacing the steering wheel and wiring the horn 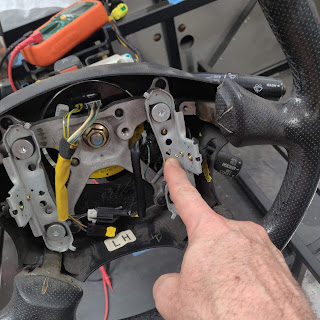 Today's project was pulling the stock steering wheel off, and replacing it with the nice, new wheel I ordered with the kit. Here, I am trying to figure out the wiring of the horn circuit in the donor wheel. With the airbag removed, I was able to probe out the wiring harness and figure out what wire I needed to use.

There's a bunch of other wiring here I just won't be using at all - cruise control and airbag. 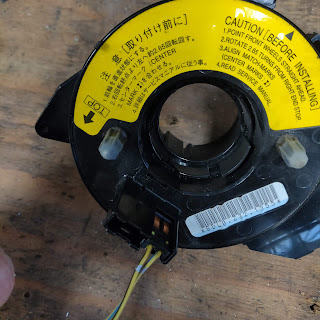 With the wheel pulled off by use of a homemade steering wheel puller (a piece of steel bar with three holes drilled in it and a few bolts), I was able to get to the clockspring assembly. This is what cancels the turn signals, and it also passes electrical connections through.

The issue here it the large connector block at lower left - it conflicts with the adapter that the new wheel bolts to. The yellow wiring is for the airbag, so I just cut that away entirely, and then I removed the plastic shroud around the four other pins - even though I only need two of them for the horn. 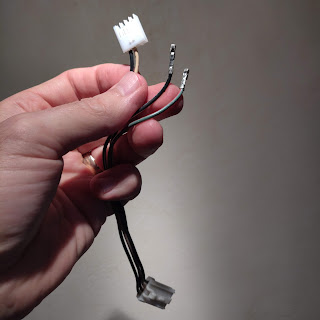 This is the wiring that goes from the clockspring to the cruise control switch and the horn. I only needed the two conductors, so I took them out of the plug, and cut them off the connector at the other end. I will add some spade terminals there to plug the horn button into. 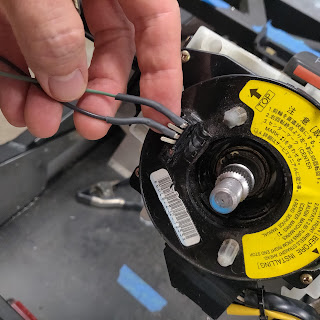 I only need two of the four conductors here. I added some heatshrink and put the wires on the pins. I also took the time to test continuity all the way through the wiring harness for the steering wheel, to be sure I had not broken anything. 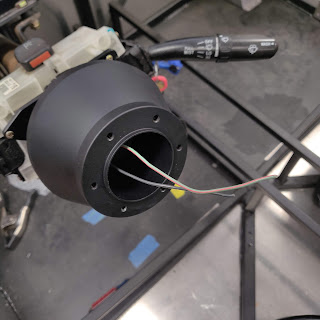 Then I just pulled the wire tails through the adapter and threaded the nut onto the steering column. I haven't torqued it down yet, as I'm reasonably certain I will need to get this off again before I go driving. 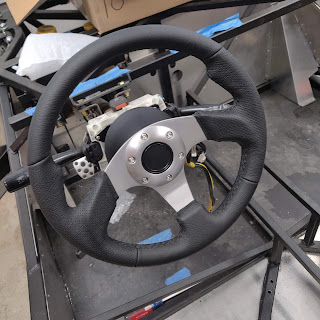 And here's the wheel all bolted up! The horn button is the black circle in the center - it will get a badge later on.

I'm going to keep a box of all the excess wiring I remove from the donor harnesses. This car is going so have so many fewer switches and buttons in it than the donor that I should be able to remove some real weight.