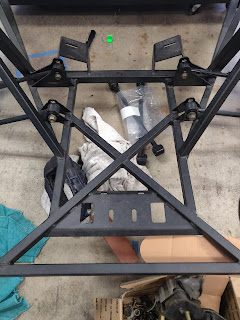 I've been kind of stopped for a while, because I didn't really know what to do about the transmission for the kit. Here's the problem: the engine and transmission assembly installs here, in the back of the car - but the way the frame is designed, the tail end of the transmission ends up being tipped up.

The fix for this is to lower the tail end of the transmission. But there's a frame in the way. 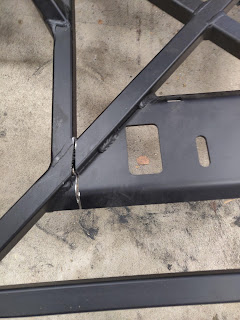 I've been talking to my uncle about this issue - he's the one who brought it to my attention. He ended up rebuilding the transmission mount at the aft end of his frame to lower the transmission a few inches at the back. He's done good work, of course, but I think there's a slightly simpler way to get the same result.

So I started with the angle grinder, making cuts in the frame, which is not something I expected to do when this project started. 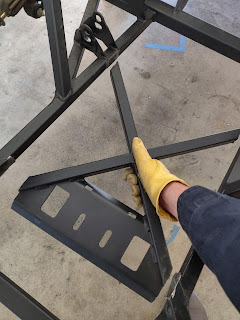 Here's what I finished cutting out this morning. The broader plate in the lower half of the picture is where the transmission mount connects.

The idea here is that I will eventually weld this back in, with some added vertical steel plates to drop it down a bit. At this moment, the goal is to drop the back two and a half to three inches, whatever it takes to get it level.

I'm going to do this by mounting this cut-out piece of frame onto the bottom of the transmission, then using an engine crane to hang the engine and transmission in the frame. I'll take the position of all of that to tack in the upright plates, then disassemble everything and weld it all up.

It's hard to explain - you'll see pictures as it goes. 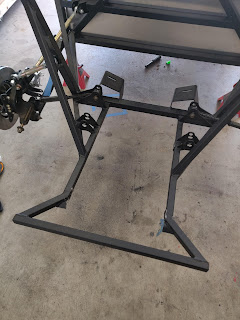 Here's what it looks like right now. Lots to do in there still.

In other news, my uncle and I also found an issue with the emergency brake setup today. But we've also already designed a solution, and parts are on order to fix it. And I am printing some parts, too. If it works out, it's going to be epic.