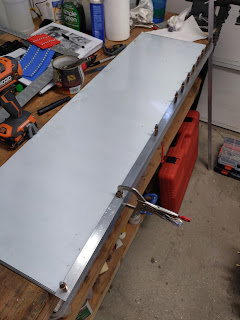 Using one of those "stretched" angles I made last time, I started building a firewall to go forward of the fuel tank. Here, I have the angle attached with Clecos to a piece of sheet aluminum. There's a gap in the hole pattern because I need to cut out a window in the middle. This will form a passthrough for shift cables, wiring, and so on. 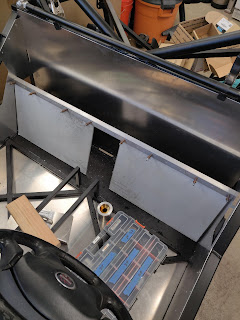 Here it is in the chassis, with the window cut out. This is going to be partly covered by a panel across the bottom, attached with screws so I can remove the firewall later to service the tank, should I need to. 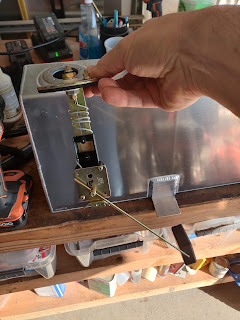 I also did a little work on the fuel level sender that came with the tank. The sender is a 0-90 ohm unit - but the Subaru fuel gauge expects a 90-0 ohm input. So to avoid a reverse reading in the dash, I had to reverse the throw on the arm. And, because the sender unit is at one end of the tank, I then had to reverse the position of the actual potentiometer on the mount, so the float would still be to the right. 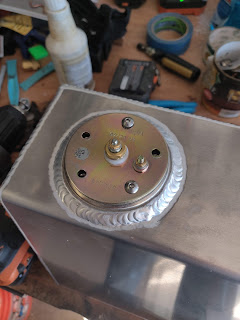 This is the reason I could not just rotate the sender 180 degrees - the mounting flange has an odd number of screws holding it down. I did try it at a 144 degree (two holes) rotation, but the arm fouled against the wall of the tank.

Next up is to get the tank actually bolted to the chassis. It does have mounting ears (you can see one of them in the previous picture), so I will drill through those and get some bolts into the frame and the floor. I am waiting on some rubber tape, though. Should show up today.