The saga of a single hole 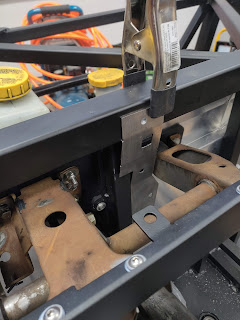 Next thing to install is this bracket, which is the bit that the accelerator pedal will be mounted to. I need to drill a 3/8" hole in the frame member there at the top to accept a rivnut. The issue is that the welded bracket for the pedal box and steering column is only about 5" away, meaning I can't get a straight shot to the hole location. 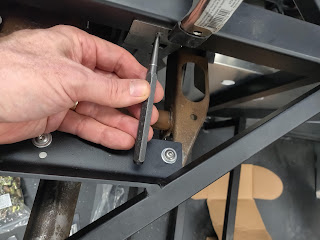 Here's my marking punch as an illustration. I want to make a dimple so my drill bit won't wander, and I can indeed get my punch into that space, but there's no room to swing a hammer to make the mark. 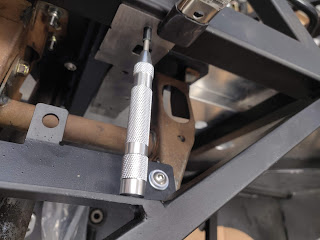 One quick trip to the hardware store later, I have the spring-loaded style of punch, so I can mark the hole without a hammer. The punch fits, but only just. It works, which is the important bit.

I 3D printed a little centering collar, so I could get the center of the hole in the bracket. 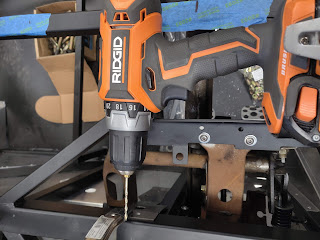 OK, now the hole is marked, but I still can't get a straight shot at it with a drill bit. I just don't have a drill that short. 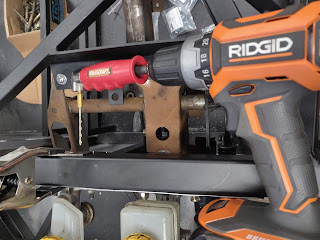 I do have this tight-clearance right-angle drive, though, so I was actually able to get the pilot hole drilled. But my 3/8" bit doesn't have a 1/4" hex shank, which is that this drive needs. 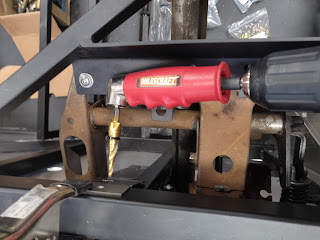 Another quick trip to the hardware store later, I have a step bit with a 1/4" hex shank, and I am able to start drilling this hole. And it even mostly worked!

I say "mostly" because the right-angle drive couldn't take the torque, even though I was going slow and putting only light pressure on the bit. It ejected a circlip while I was using it, and became useless. I did fix it once, but it immediately broke again.

I literally finished this hole by turning the step drill with a ratchet. 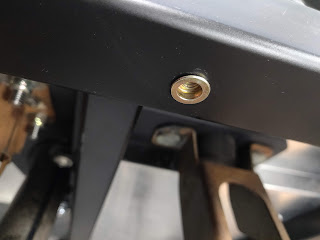 So, saga of the single hole complete, I did manage to get the hole cut, and install the rivnut. 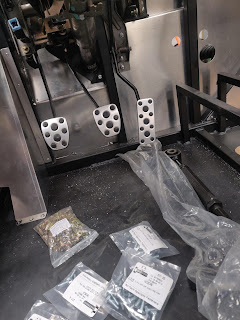 Then I bolted the pedal to the bracket, and bolted the bracket to the car. It's really starting to look good in the area of the controls.

Tomorrow, I'll be hooking up the accelerator cable, and then looking for next steps.