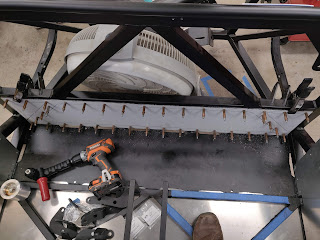 I mentioned a while ago the curious oversight of not having a firewall between the fuel tank and the engine bay, and deciding to add one. I even cut some aluminum for that, but never actually drilled any holes to get it on the car.

But further thinking (always a challenge) and further discussions with my uncle have led me to change my design for this firewall. To wit, I am putting it forward of the frame, rather than aft; and I am going to be attaching it with screws rather than rivets.

The idea here is that it may be easier to approach the front of the engine (to replace the timing belt, for example) through the firewall than the engine hatch, and may prevent having to pull the engine. Who knows, I may never need to do this, but the option will be there.

Here you can see the lower portion of the firewall installed with Clecos. I'm currently working on tapping all of these holes for 8-32 screws. The upper portion will go in later. 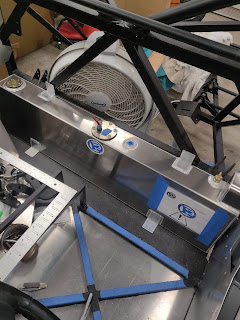 Here's the fuel tank I will be using. This is not the tank that came with the kit - that tank has a couple of design, uh choices, that I'm not very happy with. This tank has less capacity, but I like it better overall.
Posted by Josh Drew at 4:16 PM