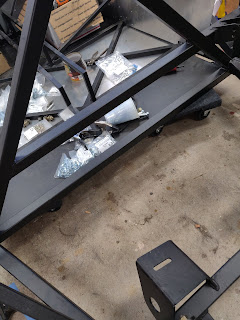 One strange thing about the 818 kit is that it doesn't include a firewall between the engine compartment and the fuel tank. The is  a firewall between the fuel tank and the passenger area, but in this picture, taken from the engine bay, you can see where the tank would sit, on that black steel floor. This seems like it would allow the ingress of water and dirt into that area, and possibly larger objects thrown up off the road.

In my uncle's build, he has added a firewall here, and I think I am going to as well. The first step is to make rough templates for the pieces that will make up the firewall. 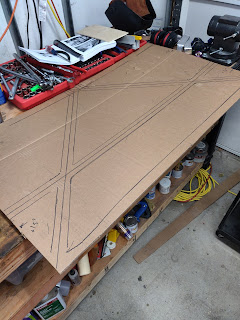 I started by cutting a large piece of cardboard which fit against the frame of the back wall of the cabin, and tracing the outlines of the main tubes. I then cut this into six main pieces, and added and subtracted a few bits to fit them around various brackets and frame members. 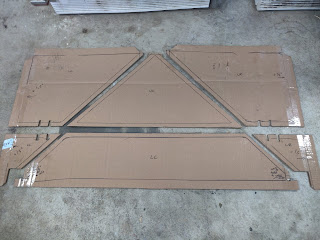 Here's what I came up with. It all assembles pretty well onto the car. It's just slightly rough in a few places, but this is a pretty good draft to work from. I need to buy some 0.060" aluminum and start cutting things out.
Posted by Josh Drew at 3:47 PM