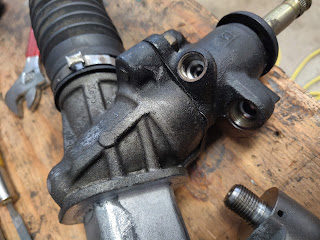 Here's the steering rack off the donor car. The WRX had power steering, so the rack has ports on it for hydraulic lines. The 818 is so light that is doesn't need power steering, so the rack gets depowered as part of the build. The issue here is that these ports could collect dirt and gunk - and also, residual fluid in the rack keeps puking out whenever I turn the thing over or turn the steering shaft. So, to stop that from happening, I am going to make some plugs. 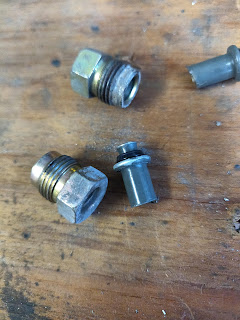 These don't have to hold any pressure, or I would buy the appropriate plugs, What I did instead was to cut short bits off the ends of the original lines, because the rubber seals on the ends of them are what actually keeps the oil in. I cleaned them with degreaser and brake cleaner, together with the threaded fittings that hold them in place. 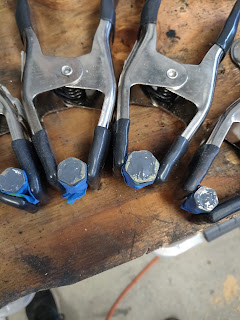 Then I just taped them up and filled them with J-B Weld. The stuff takes hours to cure fully, so I've got them held in clamps so they won't fall over or roll away. I do think it's slightly amusing that there are four plugs in three different sizes.
Posted by Josh Drew at 1:56 PM No comments: 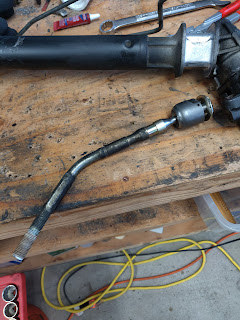 This here is the driver's side inner tie rod off the donor car. That 30-ish degree bend in it is not supposed to be there. That's the damage that actually made the donor undriveable.

Interestingly, replacing these when the steering rack is on the bench is way, way easier than when it's bolted up to the car. Every video and description I have seen about pulling these out calls for a special tool which amounts to a (very) long reach offset wrench to get at the flats on the inboard end of this assembly. But on the bench, I was able to get at them with a regular Crescent wrench. The hardest part of the whole process was dealing with the rack puking hydraulic fluid all over the bench when I was unstaking the lock washer.

So anyway, I have new inner and outer tie rod ends on order, because they were all pretty munched and why not. And I am going to be building plugs for the ports on the steering box to prevent the depowered rack from spewing more hydraulic fluid. When the car weighs 1800ish pounds, and is light at the nose anyway, power steering isn't needed, so it's going away.
Posted by Josh Drew at 5:33 PM No comments:

Steering knuckles are on! 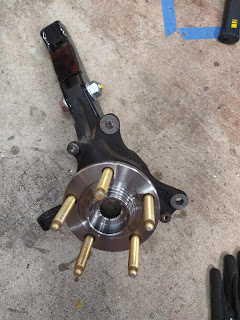 Today, I got the steering knuckles installed on the chassis. First, I bolted on this bracket which connects the knuckle itself to the upper front ball joint. I also replaced the lower ball joints, since the one from the donor were thrashed. My torque wrenches got their first outing today, and they worked flawlessly. 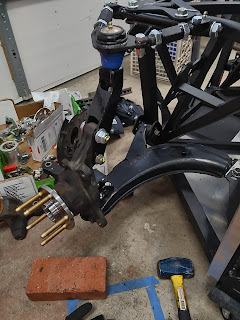 Here's what the installed knuckles look like. At this point, the upper ball joint is not fully torqued up though. 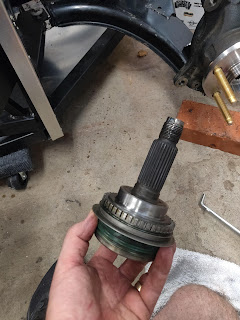 And - momentous occasion! I actually pulled some donor parts out of the shed and put them on the car! These are the axle stubs from the donor front CV axles. Since the kit is RWD only, the entire inboard portion of the CV axle has been removed and discarded. 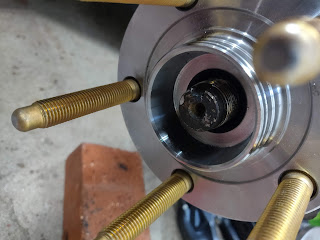 This has been a good week for the car. With recognizable suspension bits installed, the frame is looking a little more like a car and a little less like low-grade playground equipment.
Posted by Josh Drew at 4:37 PM No comments:

Finally, something besides brakes! 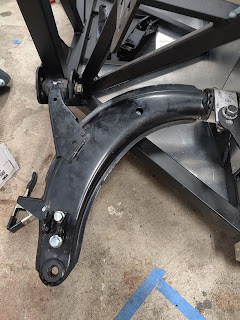 I've been putting in time and effort on the front suspension this week. I finally got the lower shock mounts installed on the lower front control arms, for one thing. Also, the rear bushings for the arms had to be swapped and then retorqued. After that, it was pretty simple to actually get them installed on the frame, as seen here. 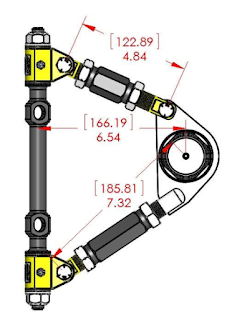 The upper control arms are assemblies. The design allows a lot of adjustment - but of course that means they have to be adjusted. The dimensions shown here are the recommendations for rough alignment at install time - further tweaking will be needed later. 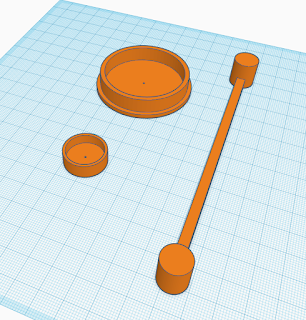 To facilitate measuring to the centers of things, I designed and printed these widgets - it's not apparent from this screengrab, but they have dimples at the centers, and in the case of the dogbone-shaped one, a groove along its length, so I can get a caliper into it. This allowed me to get everything adjusted. 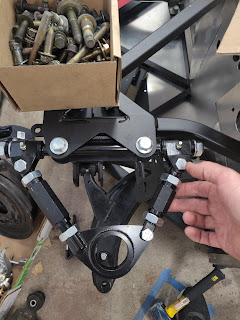 This is the first mockup install, before the adjustments had been made and before the upper ball joint was installed. 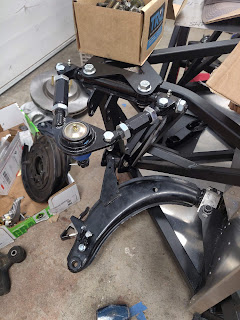 And here's both arms on the car. Between them, there will be the steering knuckle, which will hold the hub and the brakes, and also a coilover shock. Those are next steps.

A big week; a big push 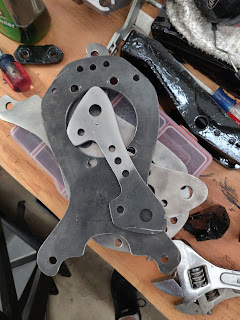 I've got a week off of work, so I am going to try to make some good progress. Of course, I had to schedule my week off on the hottest week of the year.

The brake plates at left are all in their final shape, so today I started prepping them for paint. You can see the dark grey mill scale on the plates, which is just an oxide coating created as a by-product of the manufacture of the steel plates. But it had to be removed before I could paint the parts. I have a wire wheel for my 8" bench grinder, but I had never used it, so I mounted it up and got the bare metal showing on all the parts. 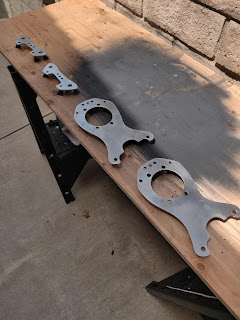 Then I got the parts set up for painting. After all, these will be under the car and exposed to weather and water, so they need protection from corrosion. I wiped them down with acetone to remove any residual oil and metal dust, and then set off with the primer. 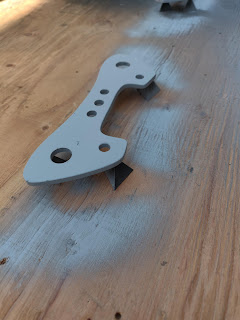 As always, I love it when my hobbies support each other. I printed these little tetrahedral painting standoffs to avoid an issue I have had before, of the paint actually adhering the parts to the work surface.

So the stopping point today was that the first side of these parts is thoroughly primed. Tomorrow I will prime the other side, and perhaps start on the paint. Nothing exciting, just flat black - because that is what I have on hand, and because these will be under the car and behind the wheels and brake rotors, so they will be effectively invisible.
Posted by Josh Drew at 3:41 PM No comments: 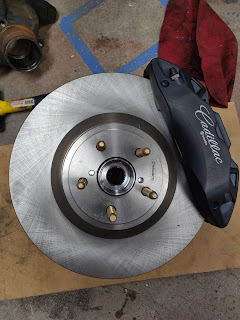 I did not get a lot done in the shop today, but I did get this mockup set up - this is the assembled front knuckle from yesterday's pressing efforts, plus a bracket I ordered online, a 12.8" brake disc, and the Caddy Brembo calipers. In the rear, I will be using exactly the same calipers and discs on the custom bracketry I've mentioned before, plus the Wilwood parking brake caliper.

Yeah, there's going to be plenty of stop.
Posted by Josh Drew at 4:45 PM No comments:

Pressing concerns in the front of the car! 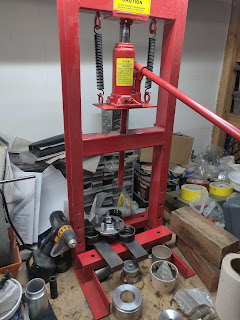 Today, I spent some time in my uncle's shop, pressing things apart and then together, to finish the assembly of the front knuckles. I got some work done on this a few weeks ago, pressing the old hubs and bearings out. I also about half-finished pressing in the new bearings, but I just ran out of time and wasn't able to finish the job.

In this pic, I am pressing wheel studs out of a new hub in preparation for pressing in new, extended studs. Once the new studs were in, I was able to press the assembled hubs into the bearings I had previously pressed into the knuckles. 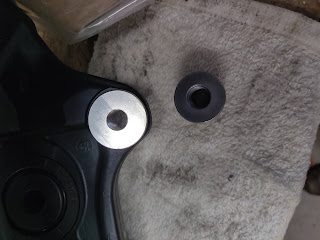 I didn't get a process shot, but one of the other things I needed to do was to press one size of threaded bushing out of the brake calipers, and press in another. This is because, unlike the rear brakes, I am using an existing bracket to get the big Caddy Brembo calipers mounted up - and they use 12mm bolts rather than 14mm. 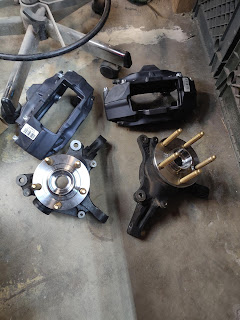 So here are the bits I did today - assembled front knuckles and calipers. I also ordered some new ball joints to get the knuckles connected to the lower control arms, because the ones I pulled off the donor were complete rubbish - the boots were both torn, which means that grit is inevitably in them.

For the rest of this weekend, I am hoping to get some good work in on assembling the front suspension on the actual car. I need to get some bracketry assembled on the control arms and start getting things mounted up.
Posted by Josh Drew at 5:50 PM No comments:

Nearly the end of the rear brakes saga? 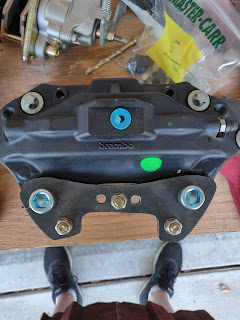 More work on the rear brake plates today. I started with tweaking the shape of the sub-plate so it would bolt up to the Brembo caliper, as shown to the left. Once I had that done, I also had to work the shape of the main plate a bit so that it would bolt up, allowing clearance everywhere. And there are some spacers that needed shaping, too; they go between the main plates and the sub-plates to center the calipers on the disc. 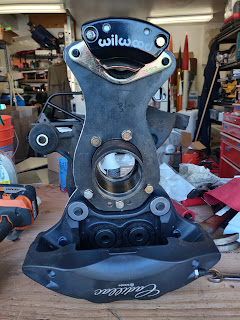 Here's what it looks like all bolted together! There's a giant brake disc that will be centered in there, of course. the Wilwood caliper for the e-brake will go forward on the car, and the Caddy/Brembo caliper will go aft.

All that's left for these parts is cleaning up and paint. I think from here, I will be working on actually assembling the suspension, front and rear.
Posted by Josh Drew at 6:48 PM No comments: 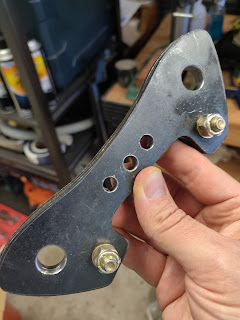 Today, I've been working on the rear brakes more. These are the two sub-brackets that will connect the main brackets to the big Brembo calipers. I've got them bolted together here to make sure that I get all the holes in the same places, and I have been drilling and reaming them to size. 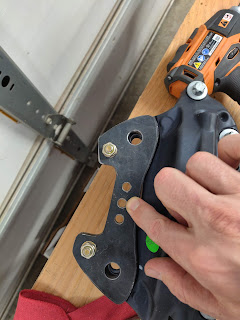 Tomorrow's project is to spend some more time with the bench grinder so that they will line up with the mounting holes in the calipers themselves. Then I'll bolt the main brackets to the sub-brackets and check to see if there are any new interference points. Of course, there will probably be some, so I'll clear those up, too. 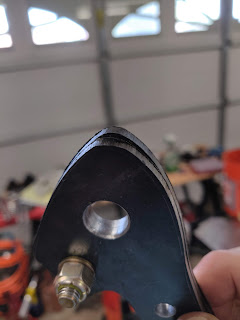 And there are a few places where the brackets are not quite the same shape, so I'll be working to clean all of that up along the way. Then, finally, I'll assemble the whole thing, clean up any new issues I might find, prep, and paint.

This whole sub-project has taken me way, way longer than I thought it would. But I am still making forward progress, so that feels good.
Posted by Josh Drew at 5:49 PM No comments: