Why do I have two cheap torque wrenches? 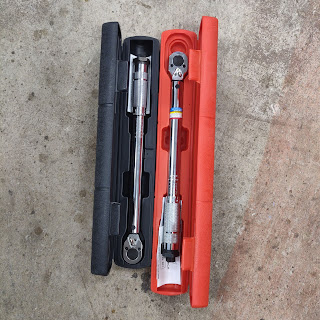 This is my first automotive project of any real size. I've tinkered over the years, and I think I know my way around an engine bay, but this is the first time I am doing anything serious. I've changed my oil. I've installed a new alternator in the parking lot after work. I've added optical timing to a points car. I've never built a car.

So of course, with any jump in the scale of a project, you have to buy new tools. And I've been doing a fair bit of that. Probably the best thing I've bought so far is a cordless impact gun (and impact sockets to go with) - that thing has just been endlessly useful  in tearing down the donor car (more about the donor later).

But that's kind of a brute-force tool. That's great for loosening nuts and bolts, but tightening them needs a bit more finesse. Lots of things have to be tightened just the right amount, and no tighter.

So the torque wrench comes into play. I've known for years that I have had a couple of cheap ones lurking in the bottom drawer of my tool cabinet, but they've just been in there, lurking. I honestly can't remember why I have them.

I do recall being given one of them. A friend had made an online purchase from the place that sells these things, and they goofed up his order. They sent two, or they sent the wrong one, or something. He told them about it, and they told him just to keep the old/wrong one - so he gave it to me.

So that explains how I got one of them. I think it's the one in the black case. But the other one? No idea. I don't know how or why I got it. I don't recall buying it, and I don't recall the project I bought it for. I don't recall having it out of its case anytime in the last few years. I don't recall ever turning a fastener with it. It's just strange. Maybe the monster in the dryer eats socks and excretes torque wrenches.

But I'm not using those for the build. Good torque wrenches are not ruinously expensive if you don't buy them off the tool truck, so I have one now. I'm looking forward to using it. But I have no idea what I will do with the two pictured above.
Posted by Josh Drew at 5:22 PM

Email ThisBlogThis!Share to TwitterShare to FacebookShare to Pinterest
Labels: Tools